Frankly, there could be no better place than where I am right now to write my third reflective discourse. I am in a good place. Physically and mentally. I am back in Rishikesh (well, above it) in the wonderful and luxurious ‘Ananda in the Himalayas’ Spa and Wellness Resort. Work has finally caught up with me, but hey, it’s a tough life when you need to spend 10 days in a high–end spa hotel, teaching Pilates as a Visiting Master. I really don’t think I should elaborate further (you can always check out my Instagram feed @pilatesretreatasia).

So, month 3 of our India adventure has pretty much been all about the Paleymobile. We bought and built our very own camping car. It’s funny, because doing this whole 10-month trip in a camping car had been one of the considerations before we left. Dissed as too stressful (“What if we constantly need to repair something?”), too restraining (“What if we want to go to Japan?”) and too much work (“All this time we would need to spend to get it ready!”), we decided against it. But I guess the idea of being able to move freely, to not have to worry about every extra kilo to carry and to have a constant ‘home’ without needing to decide in the morning where we will sleep in the evening continued to intrigue us; especially Matthieu, who has spent much of his childhood traveling with his parents all over Europe and North Africa in their self-built camping car.

“I can get you a Maruti van in 2 days”, was Simone’s answer to Matthieu’s questions whether it would be possible for us to buy a car in India. And so it was done. For a bit over €3000, the Paleymobile was acquired and driven from Delhi to Goa by two brave man (who, surprisingly, are still friends).

In total we spent about one week in Goa at our friend Taruna’s house, getting the car camping-ready, which meant building a platform for sleeping, sewing a hammock for Timo to sleep in, making curtains, buying an array of plastic storage boxes and an assortment of kitchen utensils. The fact, that the commonly available mattress in Goa measures exactly 1.2m x 1.8m, which also happens to be the exact size of our sleeping platform confirmed that this was all meant to be. The Paleymobile, I have to admit, is pretty perfect. The four of us fit to the inch (admittingly, Iluka, who sleeps across the drivers seat in the front, slept with his feet out of the window the first night and let’s hope that Timo doesn’t have a growth spurt in the next 2 months), but it’s hugely comfortable if you compare it to our tent or to a long-distance flight… In fact, ever since we left Taruna’s home on January 25th, we have spent every single night sleeping in the van. (Says she, writing this from her fancy hotel room).

And with this new mode of transportation, much of our previous worries (too much luggage, dodgy hotel rooms, crowded jeeps) have suddenly dissipated. There is so much to be said about traveling with a camping car, I don’t even know where to begin. We all love it. So much. The freedom it gives is irreplaceable. The stress that comes with it – wrong turn / lost in the middle of nowhere / busted tire / it’s late, we are hungry and still haven’t found a decent camp spot – unavoidable. I think it has brought us closer together as a family. We’ve built ourselves a little nest and have encountered people, places and situations that we would not have otherwise. Having our own car, also gives me a sense of peace and our love for freedom and spur-of-the-moment-decisions is catered for once again.

I have put together a little video about the “Birth of the Paleymobile”, so have a luck for visual entertainment and as always – thanks for listening.

Annex — statistical reflections of the three-month-mark: 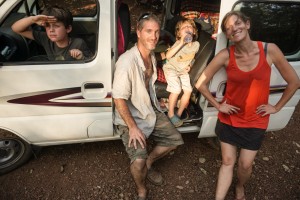 Family Climate: While in the first two months I still struggled a bit with an overdose of family time, these feelings have eased off and I attribute much to the climate. We’ve pretty much had nothing but beach, beach, beach. That means the boys (all three) are occupied, playing in the water and running around, which gave me much time to myself, reading, doing Yoga, reflecting… I feel like I am a better person when I get my dose of me-time and when the beaches are long, the waves beckon and the wind tussles their hair, I don’t even have to ask for it…

Family Budget: While spending the money on the Paleymobile and all its trimmings has made a dent into the family budget, we are hoping to recover a good chunk of that money later when we will (have to) sell the car again. And despite the €300 we spent on our ‘luxury beach huts’ with the Carmignanis in Goa, we’ve slept for free for the entire rest of the month. (We now spend our money mostly on food, car repairs and gasoline.) 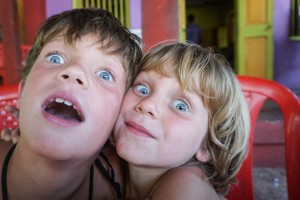 Family Relations: One thing that I’ve really noticed this month is that Iluka and Timo’s relationship is changing. They play, they scream, they ruffle each other as always, but there is a new sense of intimacy and complicity between them that I haven’t seen before. It might have to do with Timo simply getting older, it might have to do with the Paleymobile feeling a bit like a home, but what I realize is that this trip is laying a deep foundation to a sibling relationship that will extend far beyond this adventure.

Family homesick-o-meter: Don’t tell anybody, but we’ve spoken more often about adding another year to this than about what we’ll do when we come home to Alacati. But this is really just crazy talk…