It’s been a while now that we’ve been telling everybody who asked that we’ve been in India for two weeks, while in fact—it has been one month! We’ve left Turkey, and ‘home’ for that matter, pretty much exactly one month ago and this, I’d say is a perfect time to look back and spend a moment reflecting.

Reflecting. The word in itself is one that I tend not to use much in my vocabulary, let alone apply it in real life. I’m more of a full-steam-forward kinda person. Reflecting is clearly an activity that deals with the past, and what good is the past if the future is already right at your doorstep? Time is precious; let’s use it to move on… Well, I allow (or force) myself to pause here for a moment.

Part of the idea behind this trip is, as it has been said before, to find and appreciate the moment. To live in the present. To be fully there and to experience. Together. Life. It’s funny because as a retreat leader I do preach this a lot. I even teach this to people; how to be mindful, how to take a moment and pause. So now, on this trip, I am taking my own advice to heart and mind and try to slow down, to set one foot in front of the other, rather than leap ahead in pirouettes and bounces.

So far, I must say, we’ve been pretty good and of course the ‘we’ includes Matthieu (a driving factor without whom this experience would not be what it is) and the kids (somewhat unpredictable, floating along, beautifully unbiased). The fact, that it has indeed been a month already and that in the light of us ‘being on a family holiday in India’ we have NOT seen a million different places, have NOT slept in 20 different hotels, have NOT traveled everywhere by bus, car and railroad, speaks for itself. In fact, we have moved around fairly little so far. We are still in Uttarakhand where we started off after Delhi and in terms of range, we have covered just a tiny area. We are very aware of this and very aware that if we had planned a round-the-world adventure with just a month or two in every country, we would have probably spent this first month differently.

We would have felt ‘guilty’ not to have seen all the sites and places that one must should want to see. We would have spend much more time traveling from A to B and less time sitting on Reba’s porch watching Timo feed Sundari, the buffalo. We would have felt lucky to catch the breathtaking panorama of the Nanda Devi Range on such a clear day and would have missed the many nuances of colors, depths and feelings the same view evoked in us on other days. We would have probably missed the birth of the baby goat and probably not spent an afternoon trekking up to the high pasture of Ekwa by ourselves, leaving the children back in the village. We would have read many more pages of the India Lonely Planet and spent many more hours discussing what would be the best route to take considering luggage, budget, transportation, lodging and homeschooling needs. Instead, we left Reba’s one morning to ‘spend a few nights in civilization’ and to ‘find something nice to do for Iluka’s birthday’ and came back ‘home’ almost 5 days later than we had thought. This, BTW taught me a big and important lesson in ‘you can actually survive a 7-night trip without major impediments, even if you’ve only packed underwear and school stuff for three’. You should try it sometimes. Really. Pack stuff for a weekend away and then stay for a week. See what happens. It puts a lot of things in perspective, even for those already traveling with an open mind (blush). All you really end up doing is washing yourself a bit less and your clothes a bit more often.

It might seem like I am rambling, but actually… I am reflecting. And it feels good. It feels ok. It doesn’t feel at all like ‘what have I learned from the past’ or ‘what would I have done differently’. Sometimes, it’s just nice to think back and appreciate everything that has happened and to honor it. Of course, I have my demons too—the moments where for now I must keep my reflections to myself—at least until I’ve figured out what they mean. But I am hopeful that even the mysteries and confusions of an unstructured life, of an overwhelming amount of family time and feelings of guilt in regards to professional life are good for something and once I have something smart and meaningful to say about that, I promise I will share.

Annex I — statistical reflections of the one-month-mark: 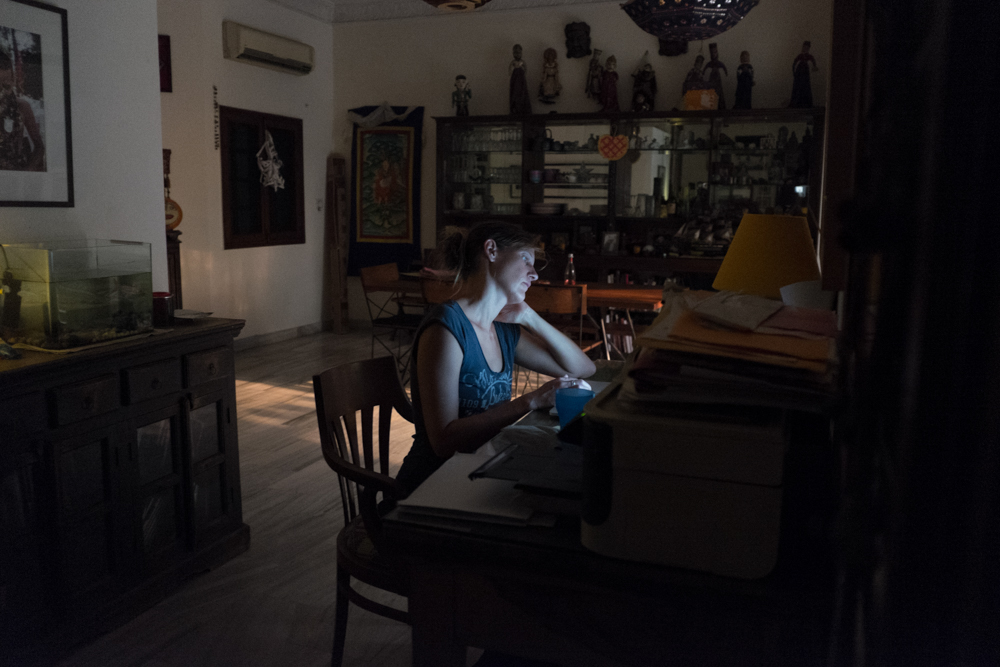 Family Health: Defying expectations, no major illnesses, including diahorrea, fever, common cold are to be reported. The only exception was a night of vomiting (Mareile) after an overdose of Indian junkfood including butternut cream cake and Domino’s Pizza and a sensational wealth of flea bites on both Mareile and Iluka.

Family Budget: Counting two nights in a fancy hotel as ‘business expense’ and therefore NOT counting them, we pretty much live on a budget that would allow us to stay in India for a few years on the money we spend back home in a few months. Our cheapest transport so far, was a 30-minute shared-jeep ride for a whooping €1 (for the 4 of us)!

Things we’ve learned: Both Iluka and Timo suddenly speak English with an ease that is simply amazing. New words in Hindi and Pahari (local Kumaon language) follow every day. I taught Canasta to Iluka and he learns (slowly) to deal with loosing: “Ok, mom—you are winning again, so I guess I’ll start crying now…”. I started learning Premiere Pro to better edit my videos and agree that it beats Final Cut by a million. Matthieu is exploring his new Fuji XT1 and playing around with new formats and subject matters. He also learned to make bang-chutney and that local remedies don’t always work.

Family homesick-o-meter: Matthieu and I are fully in our element and are wondering if we could manage a trip like that every few years. Iluka is getting really into sharing his adventure with his friends back home (What’sUp, Ilukistan, he even wrote a postcard to his class!). Timo asks on a regular basis when we will go back home to Alacati (where his toys are). But then again, he also asks when we can see Shaan, Shaani, Reba, Opa, Thilo, Baba, Babi or any other random people we met for more than a day again and when his birthday is and when we can go ski…