We are halfway through our trip. Wow. Did time pass fast or slow? I can’t even tell. What already lies behind seems huge… what lays ahead infinite. But let’s look back for now and not ahead (it seems I did enough of that last month). Month 5 was all about beginnings and ends, or better about endings and new beginnings.

Fortunately, for all of us, my bout of bad-mood-PMS-depression ended as quickly as it had crept up on me and life was back on track with a new mission: We were going to travel along the Narmada, one of India’s seven holy rivers and assuming by the amount of times we dipped into its waters during our 3-week Paleykrama* we should all be thoroughly washed clean of all sins (especially Iluka, who’s also known as Waterboy). There is something alluring and immensely beautiful about following a river from its birthplace, its source, the spot where it emerges from the depth of the earth and starts its meandering journey through a landscape. We started off at Amarkantak, a hardly-mentioned-in–any-guide-books small town in Madhya Pradesh. Amarkantak is a place where we felt like we witnessed a slice of the true India – with real people, real devotion and an authentic way to go about things. A place that gave us a break, a reason to stop and linger for a few days, a place where we found a wonderful open space for camping right outside of town to return to every night, a place that has left its mark on us, a place that comes to mind immediately when asked about our favourite places in India so far…

* A partial pilgrimage-style slow-paced camping journey following of the flow of the Narmada river, not to be confused (albeit similar) with a Parikrama, a circumambulation of a sacred place. 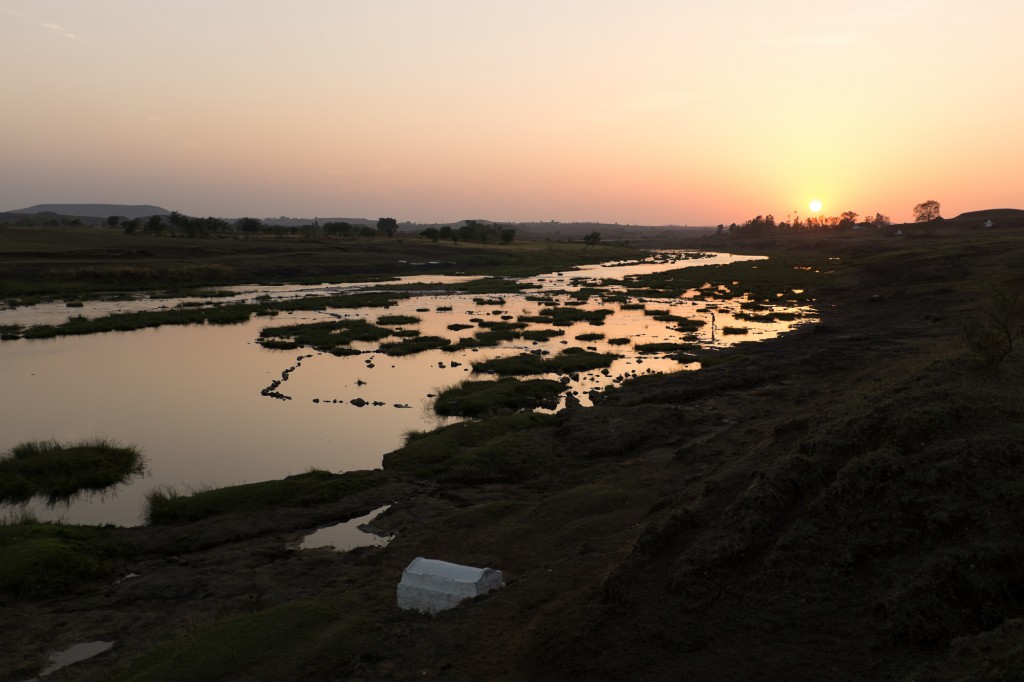 According to a legend, the river Ganges, polluted by millions of people bathing in it, assumes the form of a black cow and comes to the Narmada to bathe and cleanse itself in its holy waters. (© photo by Matthieu Paley)

We arrived on March 6th, the day before Maha Shivratri, an important holiday and celebration of the Hindu God Lord Shiva. Pilgrims where arriving from all over the place, Sadhus, villagers, tribal people from nearby Chattisgarh and lots of ‘Parikramas’ (ordinary people walking several thousand kilometers and several months (or even years) to circumnavigate the Narmada from its mouth at the Gulf of Khambhat in Gujarat to its source in Amarkantak and back). During Parikrama, they would always keep the river on their right and we had a funny incident when we invited one Sadhu over to our campsite for some tea, but he explained that he wasn’t allowed to cross. The river was barely a meter wide at that point, but for him, we were about 3000km away. 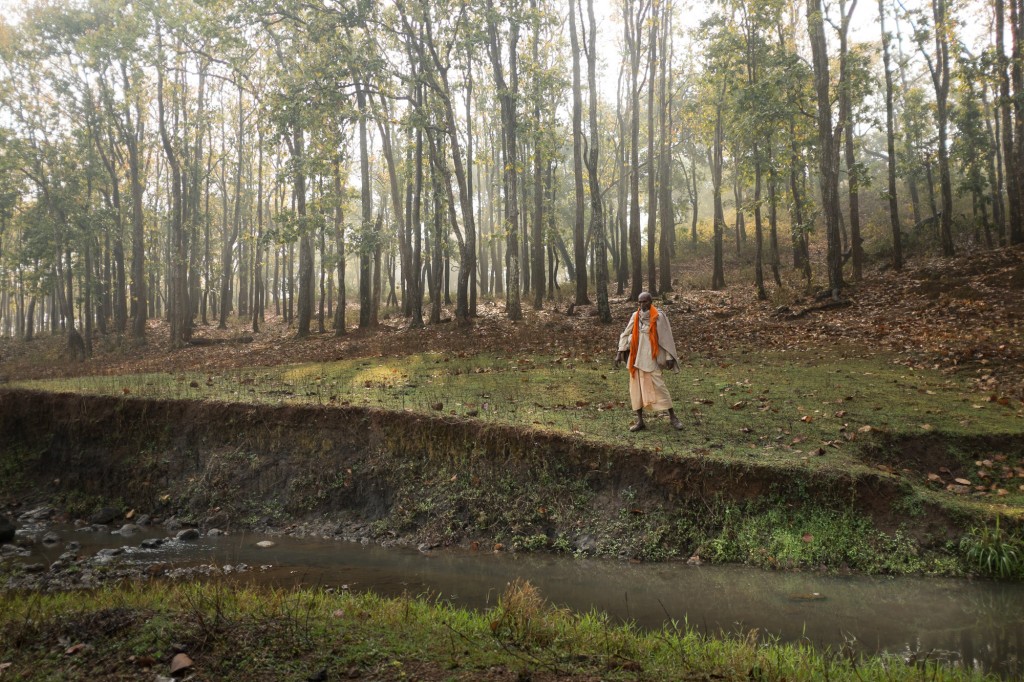 As for us, we decided that the Paleykrama allowed for free visitation of either side, depending on road conditions. Sometimes, like in Bedha Ghat, we would end up on the ‘wrong side’ of the river: Known for its stunning marble rock formations and waterfalls, Bedha Ghat is somewhat of a ‘touristy’ spot (at least for local Indian tourism). Since we always try and avoid such places and since the main town is located on the north side of the river, we took the southern approach (where there are no hotels or other tourist spots), with the Narmada on our right, ie. the Parikrama way. After one first night in the Paleymobile, we got offered a room in a small ashram near the river. To the locals it made no sense that we would want to sleep in a car. The fact, that on top of it we were on the Parikrama side of the river, left almost everyone we encountered with the logical conclusion that we MUST be doing the Narmada Parikrama and no denying would help change their mind. This went so far as one of the local boating guys, who take tourists to see the marble rock formations invited us to join for free with the promise, that he would not go further than the middle of the river, so we would not break our Parikrama.

In total, we followed the Narmada for almost 900 of its 1,312km, mostly camping out, becoming experts in reading Google Map’s satellite imagery, finding places that cannot be found in any guidebook and meeting people that no one talks about (also see #indianhighwaywalker on @paleyphoto) and that have opened our horizons. In due time, there should be a Chapter 5 – the Paleykrama for more visuals. In the meantime, some illustrative photos (© Matthieu Paley) will do the job: 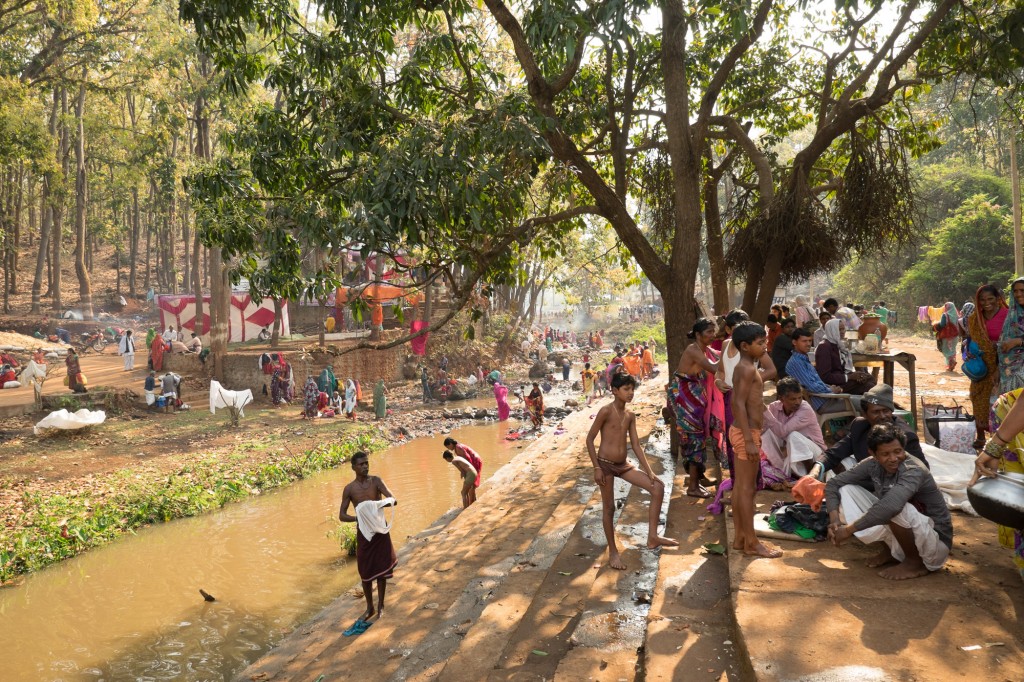 Pilgrims near Amarkatak gather during the yearly Shivratri celebrations. 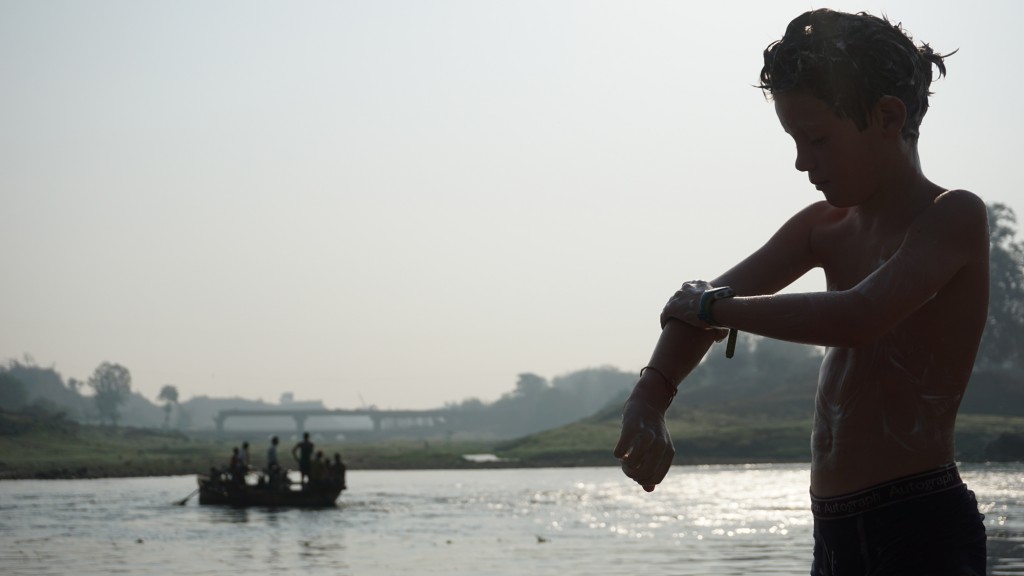 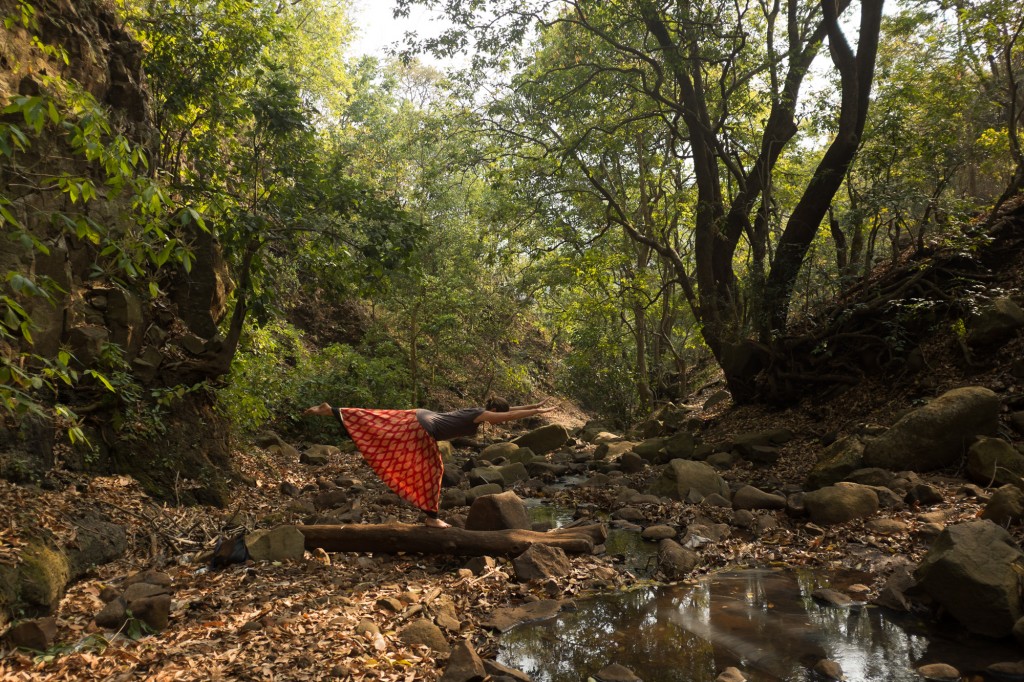 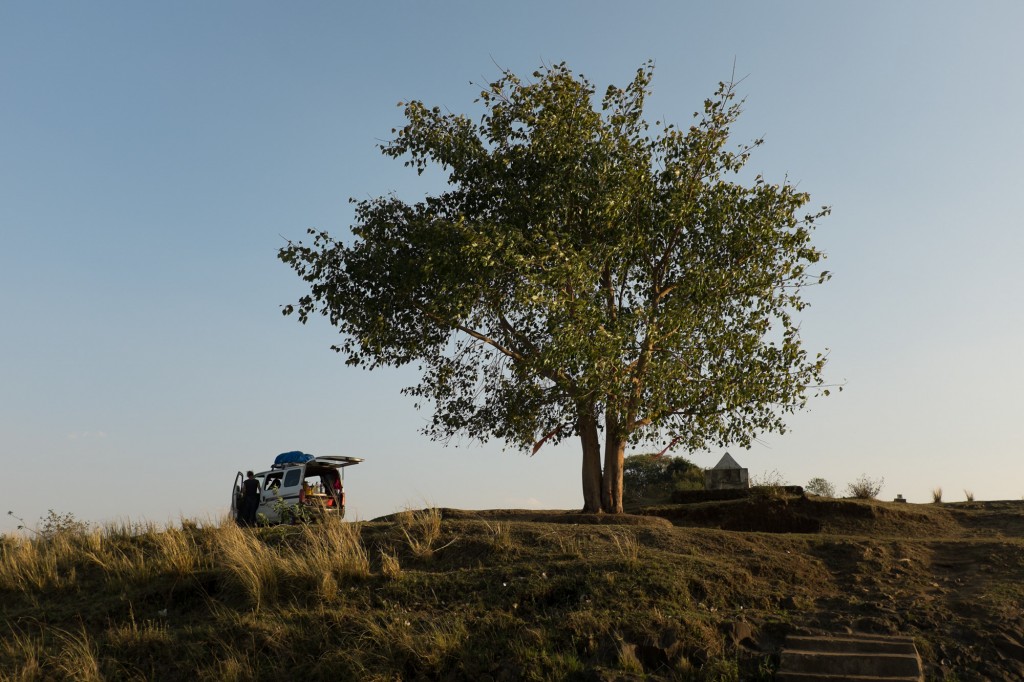 The best camp spot in all of India. A tree, a river… no need for more. 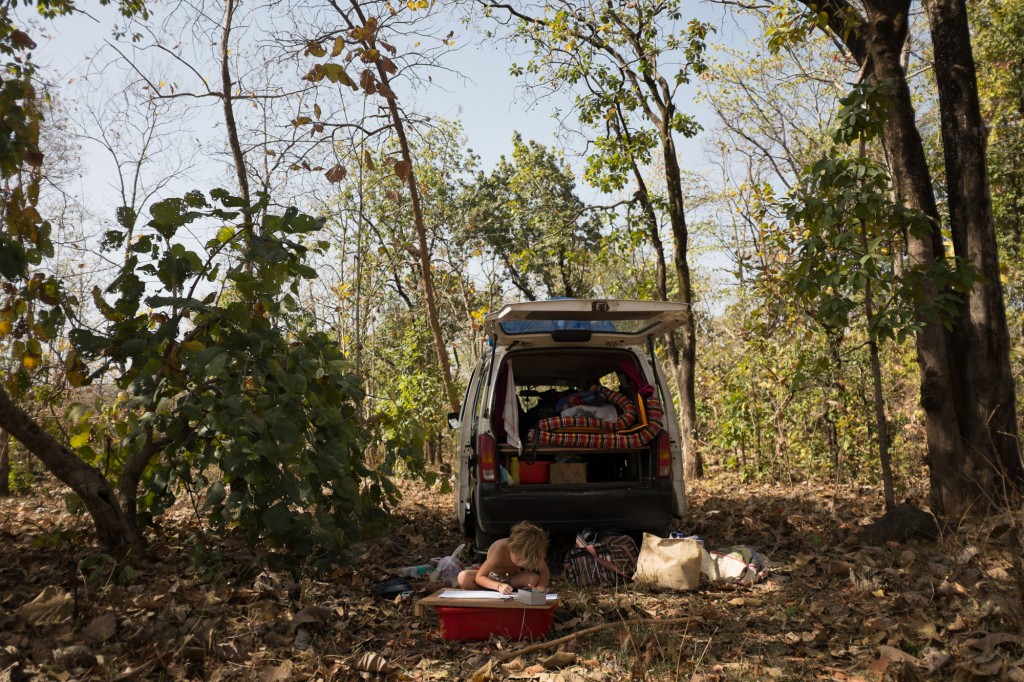 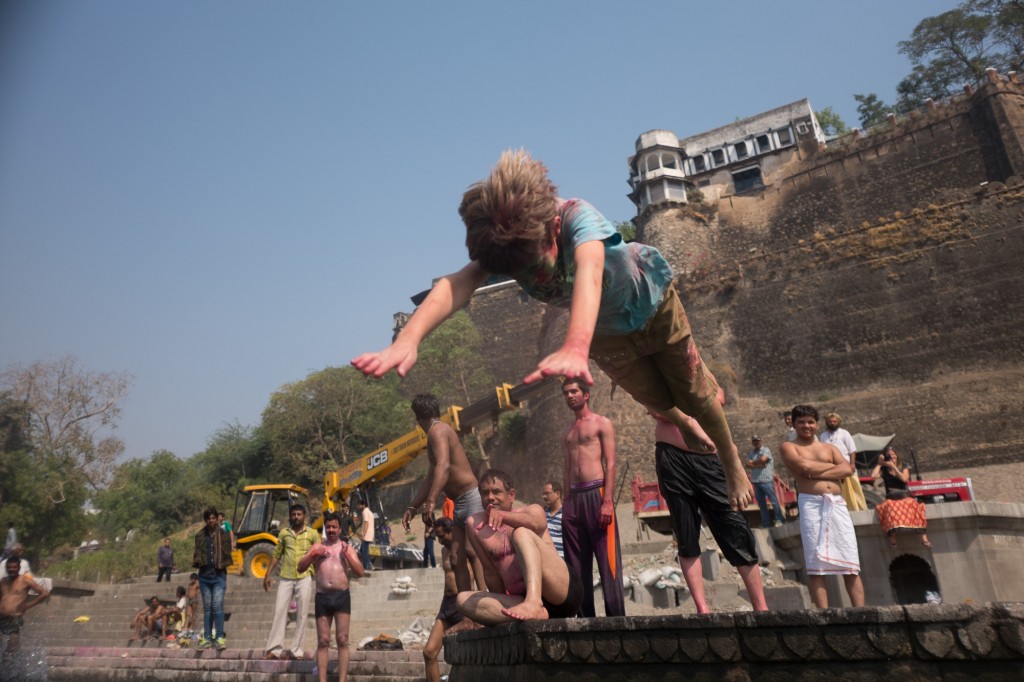 Leaving the Narmada in Maheshwar. One last jump (and best way to clean off the Holi powder).

We finally left the Narmada in Maheshwar, another one of our favorite places along the river, and headed north towards Rajasthan. Leaving the Narmada also marked the beginning of our journey home (to Delhi) and started a bitter blue feeling that also our India trip and with it our time in the Paleymobile will soon be coming to an end. Our short time in Rajasthan (just 10 days) served as our re-introduction to civilization, to the easy-to-travel India, to some creature comforts (like shakes and Pizzas for the kids) and some shopping delights for me. Rajasthan was gentle and sweet. Horses and Palaces in Udaipur, Hippies and Babas in Pushkar. 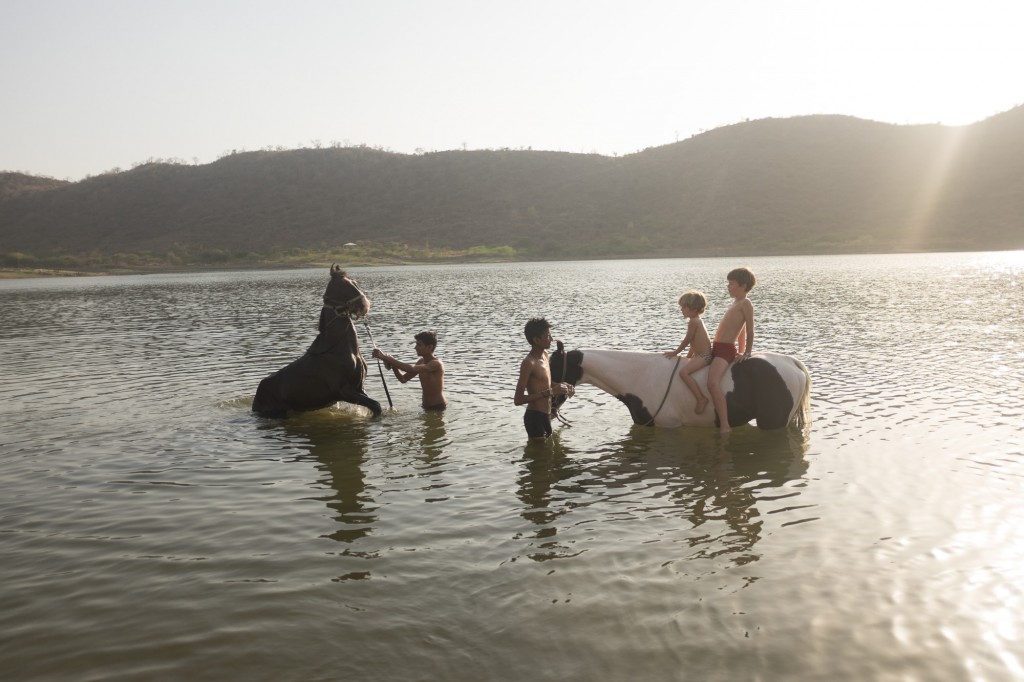 In Udaipur we stayed outside of the city at a horse ranch. The owner was friendly enough to let us sleep in the Paleymobile and just behind the hill was pristine Bari lake.

The crowning highlight and last stop was Jaipur. Jaipur with its salmon peachy Pink City, its splendid forts and bustling markets. In two days we didn’t see much of it (unless you count me misdirecting Matthieu through the traffic on arrival and straight through the old city, which was not our way at all… but at least we got a glimpse of the splendour.). Instead, I had been invited by Barbara Miolini owner of the trendy and popular Bar-Palladio (the it-Restaurant of Jaipur!) to teach some Pilates classes in her restaurant’s extensive garden. 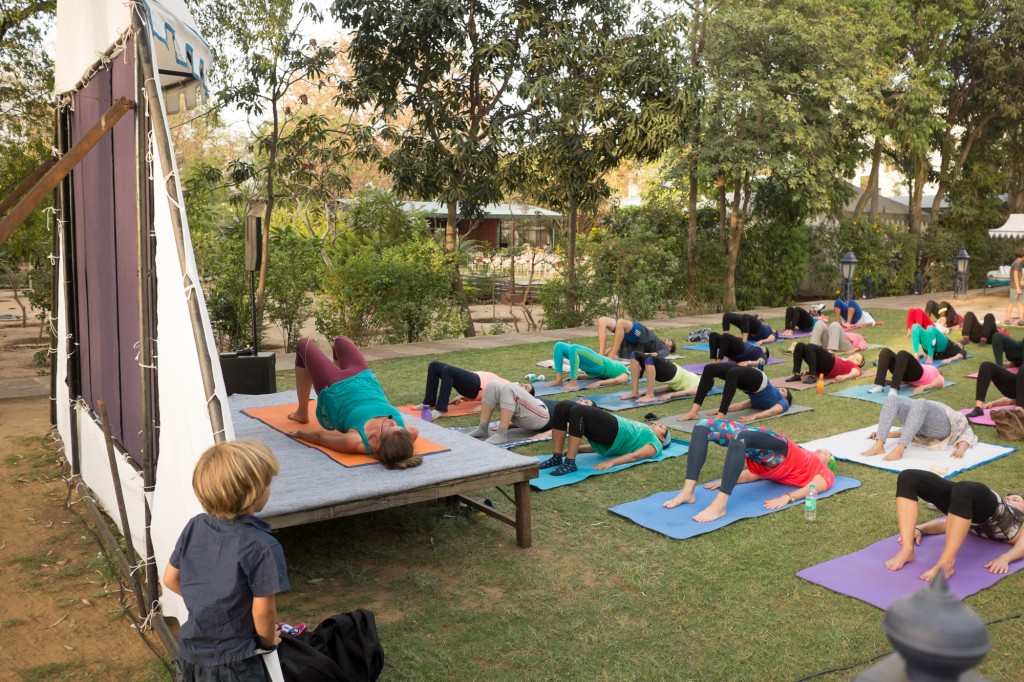 I was really surprised when Barbara called me just a few hours after she had announced the event: “I have over 30 people confirmed for Pilates. Do you think that’s ok?”

And so, I spent the last 2 days of our Indian adventure doing Pilates and eating pasta – how is that for balance?! To sum it all up: We went out with a bang and in style! The only thing left now is to sell the Paleymobile. Or maybe not…?