Coming back ‘home’ to Hong Kong (for the first time in 5 years as a complete family) was part culture shock, part break, part welcome to the real world. Consumerism slapped us from all sides, grinning at our unpreparedness. From the moment I got our high-speed 4G, 5GB SIM-cards working and set foot into ‘you-name-it-we-have-it’ internationally stocked Park’n’Shop supermarket, our money just seemed to disappear at an incomprehensible speed. I want, I need, oh look… and we could, don’t we need? It’s mind-boggling how much stuff suddenly seemed absolutely necessary for survival (or that very moment). The list quickly grew from socks to sashimi, from smartphone to headphones and from there it just accelerated to a looping cash register sound… After 3 days in Hong Kong, I felt utterly exhausted. I had shopped till I dropped, I had eaten more sushi than morally justifiable and I had met with more people than in the last 6 months combined. It was lovely to be back (and to come to realize how much I don’t need that kind of lifestyle anymore)! This chapter alone probably deserves some more serious reflection, but for now I want to move on and simply tell the story. 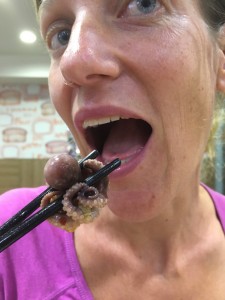 Despite the frantic, we did enjoy our little 10-day layover in Hong Kong. It felt like a break from traveling and like a snap back into working reality. Iluka walked the steep and narrow streets of mid-levels, looking up in proud amazement. This was HIS city after all where he was born.

I’m made in China”, he likes to joke, “but of excellent quality!

Timo enjoyed the Hong Kong Zoo and botanical gardens and simply remarked: “Mama, why are there no cows here in the street?” For me, much was about business meetings and forming new connections – my Pilates business still has its roots here after all. But we also saw old friends, had some drunken nights at the Back Beach Bar and celebrated Matthieu’s birthday in a bar in town that served a confusing amount of micro-brew beer. I did not go swim in the sea and I did not hike the Dragon’s Back, but you always have to leave some things for next time… 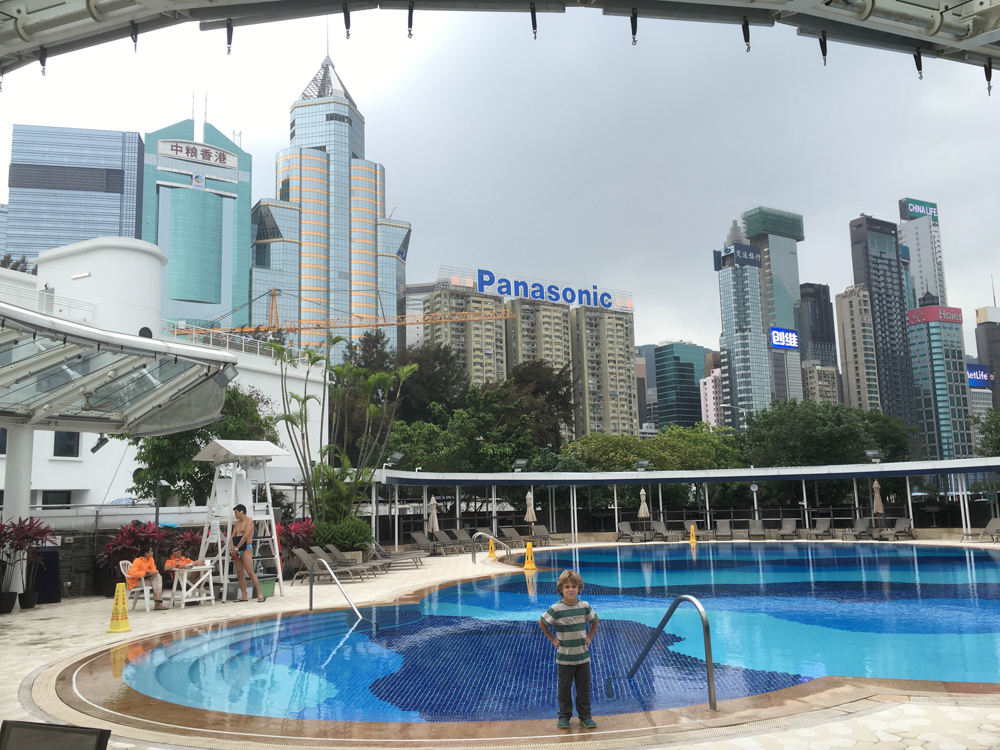 The ‘real’ reason for the Hong Kong stint was the acquisition of our visas for China, which, we thought, were easier to obtain in Hong Kong than in Delhi or Colombo. So we thought… But bring a child to China for the first time and a birth certificate is required. “No problem”, I told our travel agent. “I will email those right over.” Easy-peasy for Iluka, who was born in Hong Kong, but that Turkish kid… What we had never noticed was that Timo’s Turkish international birth certificate was written in Turkish, French and German, but not in English! No way the Chinese would accept this type of ridiculous document! An emergency run to the German embassy, where the existence of Timote Paley as our legitimate son was confirmed in an official letter, solved the dilemma. Our way westwards was paved!

Right here is maybe a good moment for a short interlude, a recap of sorts, a summary for those who don’t know the whole story. I’ll let you in on a little secret: While, indeed, the ‘plan’ for this trip was to ‘plan less’, there once was an ‘original plan’ that is known to only a few: About a year prior to leaving Turkey we had put down our names on the 12-berth passenger list of the MS. Edinburgh, a commercial fishing boat making a monthly 9-day voyage from Cape Town across the South Atlantic to a perfectly circular island called Tristan da Cunha. 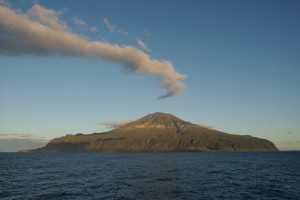 Tristan da Cunha, situated some 2-3000km of open sea from any mainland (South America, South Africa, Antarctica) is difficult to reach to say the least, making is a perfect destination for a once-in-a-lifetime journey. Without any airstrip and too far for any helicopters Tristan is only accessible by boat, making it one of the world’s remotest inhabited islands. Our wish and dream was to live on Tristan with its 268 British inhabitants in the island’s capital and only town Edinburg of the Seven Seas, below the sleeping volcano that makes up the island itself and with a single paved road leading up to the Potato Patches. Four months on a 207 m2 island, with no internet and obviously not much to do would be a perfect exercise in slow living. We weren’t actually sure if we would love it or hate it, but we were ready to find out.

Alas, berths on the Tristan-bound boat are hard to come by and as tourism is of little to no interest to the islanders, we kept on being bumped down the passenger list, until, in September 2015 we were informed that unfortunately there was no space for us on the boat. Disappointed, but still hopeful, we swiftly re-applied for 4 berths later in May 2016 and throughout our Indian journey we kept on waiting and hoping for a second chance. This was crushed, when we received our second rejection in March: “Don’t take it personal”, the e-mail from the Secretary said. “It is very difficult when trying to fit a family of four on a vessel that only has 12 berths!!! I have had two Japanese TV Teams with 4/5 on each team on my passenger list since 2013 and they have not been able to visit Tristan yet due to the berth availability.

I guess the waiting finally had an end and we were free to think of Plan B. It only needed a chance pointer in the right direction and Plan B came to us, before we had to break our heads about the ‘what now’. In April, Matthieu got offered an assignment in Urumqi, Xinjiang, on Uighur food. Having been in Urumqi back in 2000 when we had traveled overland from Pakistan to China, then Kyrgyzstan and Turkey, we immediately liked the idea of returning. “And then we could take the train to Kashgar and from there go back to Pakistan via the Khunjerab Pass,” was my first and immediate reaction. It was like a light bulb had been lit. Little did it matter that the original reason for the trip to Xinjiang (the photo assignment) didn’t materialize in the end – the excitement of returning to Northern Pakistan, to bring the children, to cross China by train, ignited a wonderful glow within my heart. There was nothing more that I wanted than to do this trip. It was a perfect choice and perfect end for our journey! Some research implied that the Chinese visa was a bitch to get outside of your home country. I carefully suggested: “And what if we were to fly to Hong Kong from Sri Lanka and get the Chinese visa there?” This triggered an immediate response by Matthieu: “Then we could take the train from there to Urumqi, crossing all of China!” Sometimes things just fall into place.

So here we are, circling back to reflections on our seventh month on the road, which was spent in two greatly contrasting corners of China. From familiar, high tech Hong Kong, we took the bus across the border to busy, bubbling Guangzhou.

It’s difficult to summarize the different impressions and experiences, the return to Hong Kong, the two days spent in a train, the trip through the eastern part of Xinjiang. I have given some story telling time to each of them in the videos you can find on the China page (coming soon). What I like to do in these monthly discourses is to look, or better, to feel back and search for the common ground, for the overall tone, the lasting impression. RETURN is a word that comes to mind. We are on our way back. There is the beautiful geographical line ‘returning’ us home, from east to west, from Hong Kong all the way to Turkey. Along that line, we are returning to other places we once called home – Pakistan, the mountains of the Karakoram and Pamir. Kashgar and Tashkurgan… places we have revisited this month. But on this return there was also much new to discover: places of the northern and southern Silk Route, whose names once spiked our fantasies and evoked an adventurous longing to travel on forever. Turpan, Kuqa, Hotan and the sweet sounding Yarkand. We crossed the Taklamakan desert. We spent hours, eyes wide open, taking in the smells and colors and vibrations of the Sunday markets. The food! Oh, Laghman, Mantu and Kebabs! Are you sold? 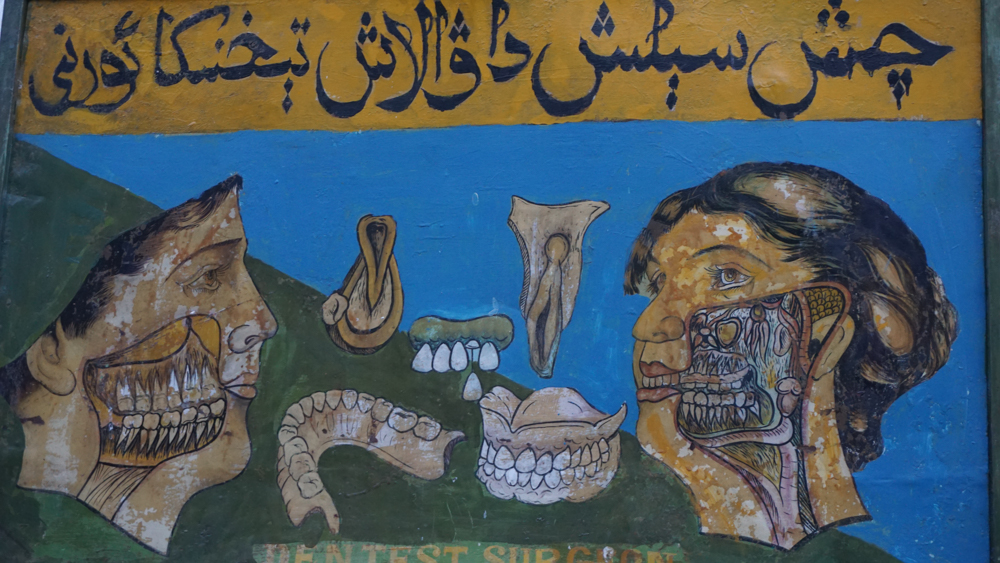 Knowing that healthcare is free in China we were tempted to try one of the local dentists (usually situated right next to a street food stall). Will it hurt? 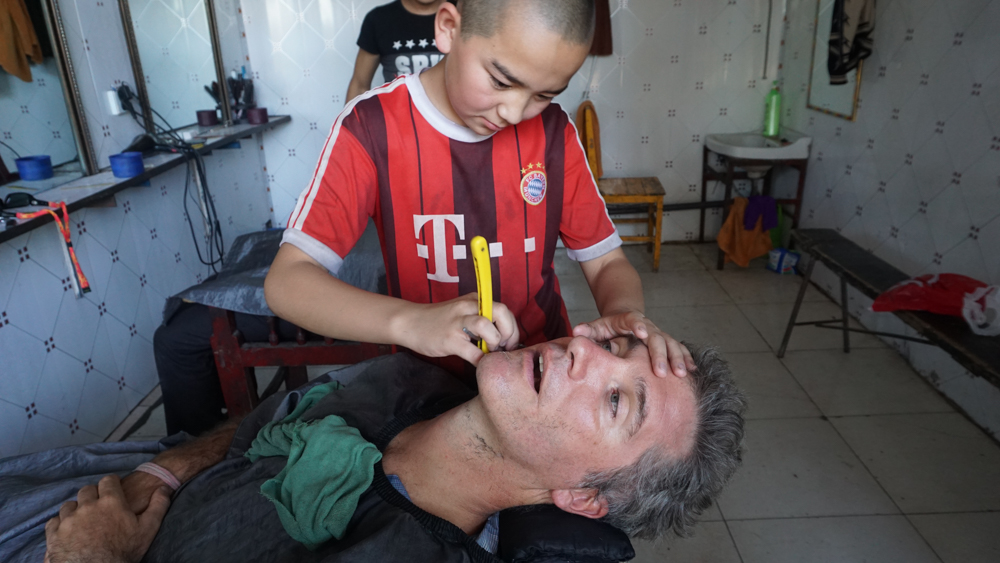 Instead of the dentist, Matthieu opted for the barber – getting a dry shave from a boy that hadn’t even grown a beard yet…

Well, of course there is a flipside, a parallel reality to all that. Most of those formerly splendid silk route towns build of mud and with blue-tiled mosques and minarets, are today large, modern, developed, ugly Chinese cities. Remnants of the Old Town can be found tucked away in Hotan behind the cemetery, under the grape vine trellises of Turpan or fully restored and restaged in disneyesque splendor in Kashgar. Pedestrian underpasses lined with cheap plastic kid’s toys and sparkling handbags syphon the crowds safely from one side of the road to the other – kilometer long barriers above ground make sure not even my rule-defying Frenchman crosses the street. Chinese taxi drivers greet us with a blank stare, uttering the words: “Tin bu dong (I don’t understand)” before we even try to explain where we want to go. It’s tough traveling in China. The language barrier is huge and extends quickly into ‘I don’t want to even try to understand you.’ Video and surveillance cameras at every corner make you slightly uncomfortable and evoke serious thoughts on Big Brother Beijing watching his Uighur citizens at every step. Lots of check posts, police controls and random ID checks are a daily nuisance and fact of life for the locals. The hotels (those that are allowed to host foreigners) are all more or less the same – comfortable for our standards with large beds, carpeted floors and modern bathrooms. They also lack character and after a while it all became a bit repetitive, especially for the kids. Drive for hours in a dusty bus or train, arrive at the station a few kilometers outside of town, take a taxi, check into the hotel, walk the streets, eat laghman, explore the market, sleep, repeat…

I think what remained in the end are mixed feelings and once again a certainty that the romantic memories will prevail, because… we did love our trip through Xinjiang. The dusty landscape, the moody light, the crazy colors of the Uighur fashion… those are the Central Asian ingredients that both Matthieu and I feel strongly drawn to, setting the scene and leading the way to our favorite of all mountain environments – that of Northern Pakistan.