First there was a jolt in the stomach like when you realize you forgot something. It quickly turned into a smile when I understood: we’ve been in Pakistan for a month already and I have been completely unaware! After all this time spent on the road, practicing the here and now, the living in the moment… this was it! Time had passed without notice. We are just here, breathing the fresh mountain air day by day, letting life happen. After 9 years of not having visited Pakistan, I was once again reminded of my own quote that I used to tell people: “Northern Pakistan is one of the most mind and soul cleansing places I know.” Nowhere am I more happy to just live into the day.

And while you just live into the day, a lot of things happen, most of which don’t require much planning. The approach is slow and organic. Plans develop from ‘we could do this one of these days’ over ‘let’s do it tomorrow’ into ‘now? Ok, then, let’s go’. With this method we have, over the last month, visited old friends, gone trekking, crushed weddings, cooked dinners, played volleyball, gone camping, attended local schools, mended clothes… Thus is the beauty of returning to a place you know well: All the pressures of exploring and sightseeing, of learning as much as you can about a place in the quickest time possible, of moving, observing and judging dissipate. If you know a place well, you can allow yourself to just be. Without guilt. 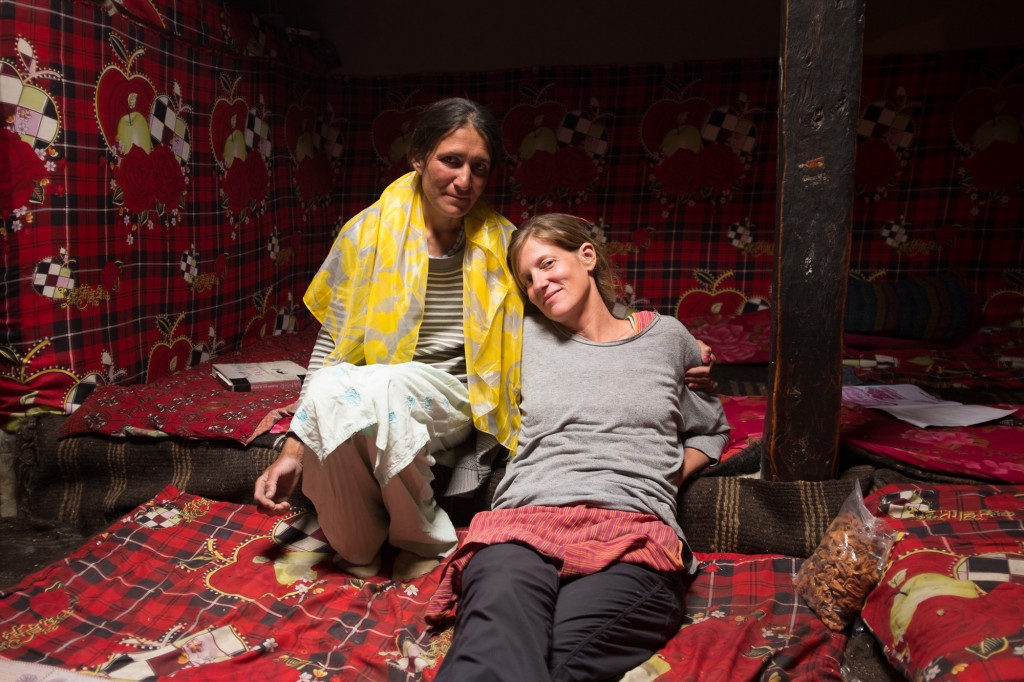 Hanging out in Chapursan with Asra, whom I hadn’t seen for 11 years!

MOUNTAIN LIFE
With that spirit we spent the first two weeks after our arrival from China in our beloved Chapursan Valley – a place we have explored in depth and visited many a times between 2000 and 2005 at the height of our Pakistan days. Chapursan and the Pamir Mountains are deeply entangled in our personal history, starting with its people (the Wakhis, Alam Jan’s family and many more) and continuing through its beautiful mountainous surroundings, which stretch all the way to the Afghan border (where once a promise to marry and to spend the rest of our lives together was sealed).

I am not at the point where I tend to ‘feel old’, but when you are being enthusiastically greeted by a young Wakhi woman telling you how she remembers you and Matthieu playing with her in a field when she was a little girl, you do stop for a moment to think…and smile. I guess we were young after all, when we did all this. Unmarried, no kids, no house, no car, no stuff. I could see myself living here again, working on some projects, so beautifully unattached to a ‘normal’ Western lifestyle. Matthieu’s hair and beard are grey now – the kids call him maper (old man) or betch (uncle), while it used to be vrit (brother) or abi (older brother). Thanks goodness, everyone agrees though that I have not aged a bit in 10 years…

Coming back with the kids brings another, wonderful, dimension. They get to live some of their parent’s history, listen to the stories, see the old photographs on the walls and now they are part of it. Iluka, I think, enjoys this and is full of questions trying to put together a timeline of his parent’s past. He wants to hear the stories, wants to know if we will go to the Pamir. Timo, on the other hand, has difficulty grasping the concept of there being a pre-Timo world. “But where was I?”, he wants to know. “You did not exist yet.” I try to explain. “Was I in your belly?” “No, not even…you were just not there yet.” “But where was I?” he insists. After a long back and forth, we settle on “You were really high up there somewhere in the sky like a star.” “And tiny, tiny, tiny!” Timo adds.

Another cleansing side-effect of being in Gojal (the name of the region north of Hunza) was the forced digital detox. No internet or 3G connection at last – a first in our 8 month of travel! Matthieu managed to get a local SIM card in order to be reachable by Pakistani friends and family, but alas, if there is a power cut (and there are a lot of those) it also affects the mobile service transmitter tower. No electricity, no mobile phone connection. And so, we disconnected for a while from email, Instagram, facebook and google. My fancy iPhone was reduced to serve as a flashlight at night and its battery lasted for days! When it finally ran out, I did not even notice…

CITY LIFE
Our families back home, of course, notice when they don’t hear from us for a while and since the good old PCOs (Public Calling Offices) have vanished with the arrival of mobile networks we had to extract ourselves from our timeless bubble and left Chapursan for the civilized world. Gilgit. Here, the internet is working (if you are lucky) and the electricity works most of the time. Gilgit, capital of Gilgit-Baltistan region (which was called Northern Areas back in our days), has not changed that much in 10 years. The men still stare, when I walk in the bazar, the bag-repair-wallah, my old tailor, the Pathan guy frying greasy keema (minced meat) patties into unidentifiable black blobs in front of Ramazan Hotel are all still here. The Madina Hotel and with it the legendary Uncle Yaqoob still stands! Behind the counter, on a photo collage wall telling of the good old days where backpackers, cyclists and around-the-world travelers would populate the once busy guesthouse exchanging stories and meals, Iluka spots a picture of his parents, smiling, holding a flower. When was that? 15 years ago? Maybe more? “And where was I?” chimes Timo.

We settle into our old room – D2. Besides the addition of a small flatscreen TV not much has changed. 20-year old David from Australia and 70-year old Georg from Munich, who’s on his last leg of a solo overland tour through Central Asia are the only other guests. David, we find out, is in Pakistan because of Matthieu. He saw his National Geographic presentation on the Evolution of Diet where he talks about Hunza on YouTube and decided he must go and visit Northern Pakistan. Little did he know and big was his surprise when on that same trip he bumped into the man himself… Sounding like old hippies we try and explain the great vibes and much fun we had here back in the day. The yearly reunions of travelers returning each year, the late night talks and parties in the back of Old Madina, the hours spent over breakfast telling travel stories to newcomers and exchanging trekking tips with those just back from the mountains, the communal dinners, BBC World News running on the TV all day, the friendships we established with the Madina staff over the years. This was home for so many months spent in Pakistan. Now, it seems there is not much more left than an empty shell. No more banana pancakes for breakfast, no more chit chatter. To make things worse, but fair enough to the destitute local tourism industry, in recent years domestic tourism has taken off and from June to August hordes of ‘adventurous’ Punjabis leave the steaming plains down country and head for some fresh mountain air. They drive up and down the Karakoram Highway on motorbikes, in jeeps and rental cars, stopping for group selfies, wearing bandanas and leather jackets over their shalwar kameez. They fill up the hotels. They are noisy and nosy and make me feel like I need to hide under my dupata (headscarf) from their stares. I don’t like to generalize and of course we’ve met some nice Punjabi tourists as well, but overall… it’s a sad and terrible experience. They leave their trash everywhere and stare at the local ladies (which often go unveiled). The Madina just doesn’t feel the same when every inch of the garden is populated with Pakistani men, talking, laughing and blaring all night with no respect or understanding that they are in a hotel where other guests might want to sleep.

So we escaped. Back to the mountains. A short trek might be nice. 4-5 days we thought and left Gilgit for Yasin Valley. Knowing us, I packed food and clothes for seven. We returned after twelve…*

Time in Pakistan will always be like chewing gum. It stretches and contracts at will. It stands still. It rewinds. It fast forwards. All you gotta do is to go with that flow… 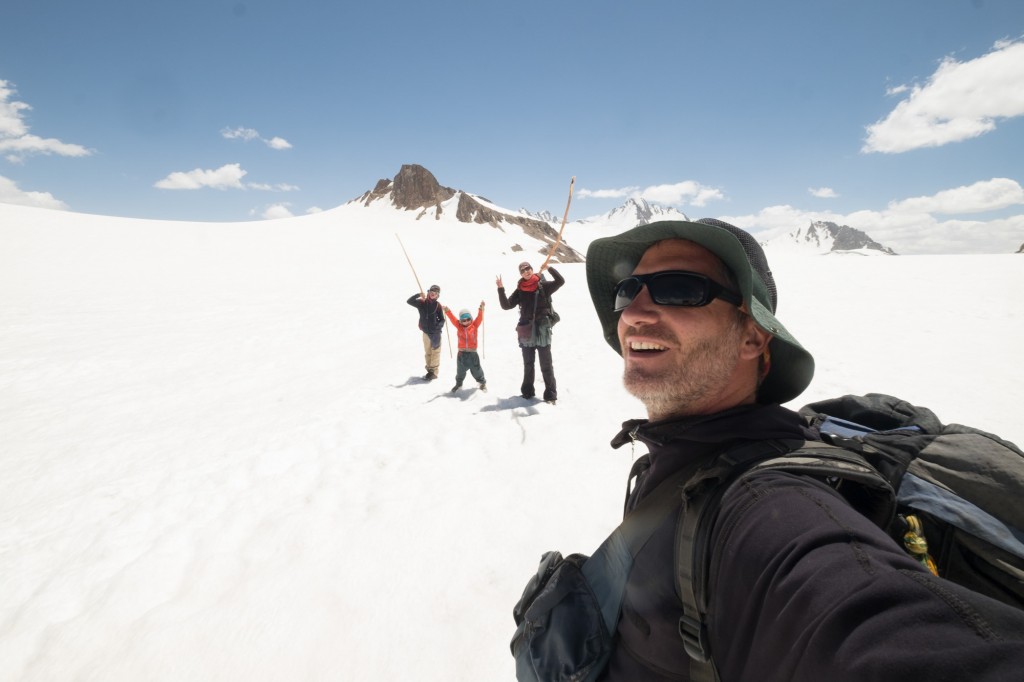 On top of Darkot An – a great adventure and the kids climbed up like mountain goats!

* For a detailed account on our trek over Darkot An (4650m) from Yasin to Yarkhun Valley, see The Pass The Donkey Didn’t Make (but Timo did) – coming soon…